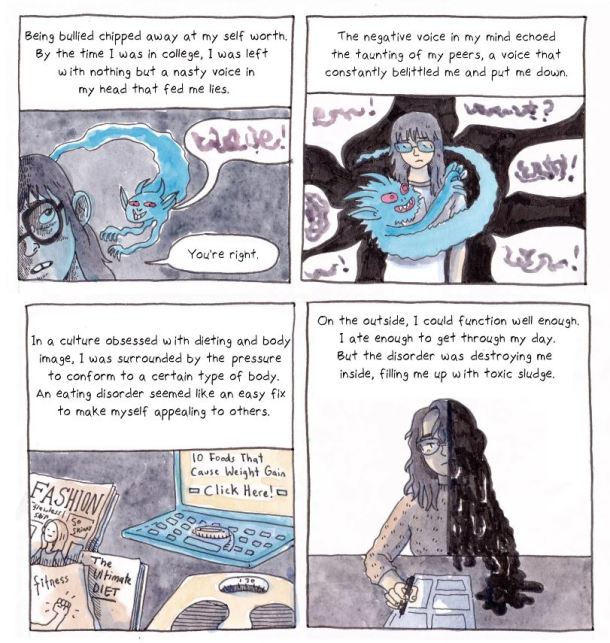 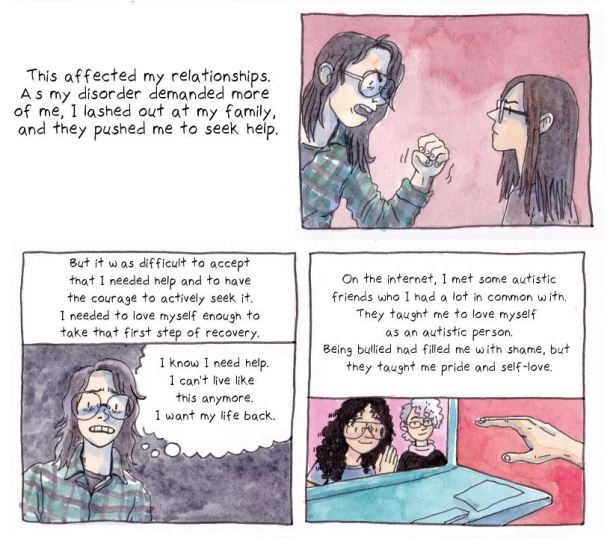 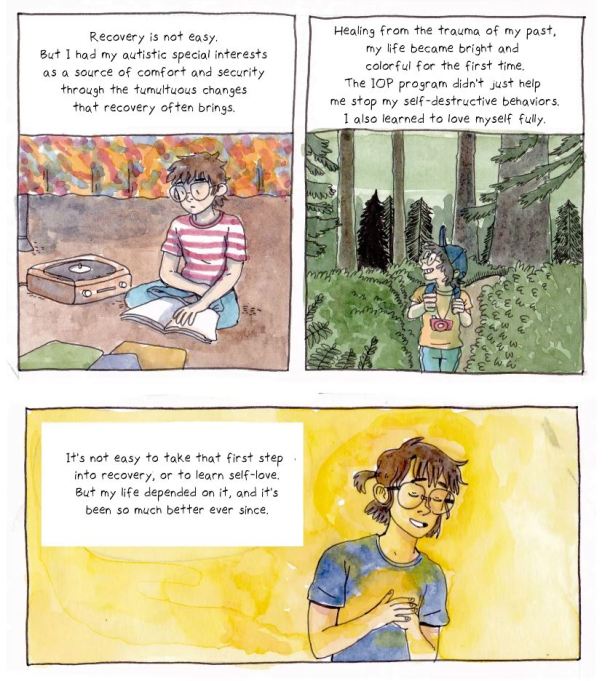 Originally appeared in The Nib on July 13, 2017. Reposted with the author-illustrator’s permission.

“Sticks and stones may break my bones but words will never hurt me.”

Many of us might remember hearing this phrase during childhood as a response to the taunts of playground bullies. The sad reality is that words do hurt, and their damage can extend far beyond the school playground.  The above comic, written and illustrated by my older sister, depicts her experience with developing an eating disorder after being bullied.  Her story aligns with recent research on how bullying impacts the adolescent brain, and how this can, for some, play a role in the development of an eating disorder.

Adolescence is a period of time when a greater value is placed on peer relationships. During this developmental stage, a friends’ approval can be the main factor in how a teen determines her or his self-worth and rejection or humiliation by classmates can be psychologically devastating. Brain imaging studies have found that in adolescents, neural regions that respond to social rejection are highly sensitive. These are the same regions that get activated when we experience physical pain, which may explain why it can feel so hurtful to be a victim of bullying.

Repeated bullying can have long-term consequences for adolescents as well.  According to the CDC, victims of bullying are at an increased risk of developing depression and anxiety, and have difficulties sleeping and adjusting to school. Now researchers are also evaluating bullying as a risk factor for eating disorders as well.

Because most eating disorders develop during adolescence and are strongly linked to a person’s self-image, some researchers are beginning to wonder if there is a connection between social rejection and eating disorder development or severity. According to scientists developing this line of research, teens who develop eating disorders display, on average, increased neural sensitivity to social acceptance and rejection compared to teens who do not develop them.1 These differences in sensitivity may last beyond adolescence as well: one study found that women currently with or recovered from AN or BN pay more attention to “rejecting” faces than their healthy counterparts. In addition, another study found that eating disorder illness severity is associated with stronger activation in the brain regions that are linked with experiencing physical and social pain.

Why might this happen? One theory is that teasing and bullying can lead to negative self-evaluation, which may play out in a range of disordered eating behaviors. For example, one person might try to feel better about herself by restricting intake, while another might begin binge eating to avoid or numb negative thoughts and emotions. In the individual vulnerable to developing an eating disorder, this may become a vicious cycle, where harmful eating becomes a coping mechanism for diminished self-worth.

The research on social rejection and eating disorders may be limited but we do know that being a victim of bullying can worsen a teen’s self-image. Remain vigilant for the signs of bullying in children and teens, as well as the signs of disordered eating.

© The Feed, 2013-present. Unauthorized use and/or duplication of this material without express and written permission from this blog’s authors is strictly prohibited. Excerpts and links may be used, provided that full and clear credit is given to the article’s author and The Feed with appropriate and specific direction to the original content.